August 11, 2008
Disclaimer: I am not a sportsman. I am slightly obese and overweight and I couldn't probably walk 5 kms on a stretch. Still my dream is having a 70inch (not cms) LCD TV in my home and watching India win the Cricket World Cup some day, again!

There is a certain charm in getting up at 1300 Hrs on a Monday. Primarily that means not being bugged by the so called Monday-morning-blues. So I wake up one such Monday "morning" and misty eyed as I am, I log on for my daily dose of news online. Usually that means something like – "9 Blasts 14 Injures", "Dhoni pulls out of test series", "Shilpa ready to rock Big Boss" and "Nothing can stop me from becoming PM : Maya". It is not everyday that an ordinary Indian like me [here], wakes to the headline "IT'S A GOLD: BINDRA BAGS INDIA'S FIRST". 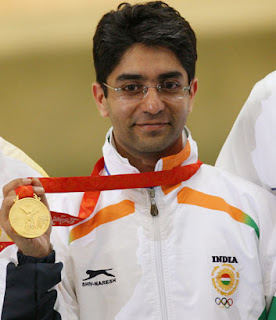 I cannot even begin to imagine what an Olympic gold would mean to a sportsman, and there are not many Indians alive to tell you that either. Now we have a 25-year-old who has chosen to let us fellow Indians learn what it means cheering for an Olympic Gold winner. And as much as this medal means to Bindra and his family and friends, it means no less to sports enthusiasts like us. Being a sports fan in this country is not very easy. Yes you have cricket – my religion – and that's pretty much it for most people. But there are a few others for whom the conquests of certain Leanders, Tirkeys, Bobby-Georges and Rathores do mean something as well. So when the going is tough, which is the climate in this nation, you don't find many people to empathize with.

Your own Indian Olympic Association releases a comment before the start of the Olympics "Don't expect medals in Beijing". We send out athletes in the backdrop of such statements to the biggest stage there can be and we expect them to perform. Then you have the intelligentsia sitting on every pan shop in the country telling you how we should not be sending contingents to such events as it only brings shame. They go on to add that this is complete waste of public money (something they hardly recall while spitting that same pan on some national heritage building). Add to that the college canteen conversations that go something like "How can you be a (sports) fan? What has the India ever won? A bronze, a silver? These athletes don't care for the sports either. They are just there for the government jobs and facilities. We should learn something from African countries at least. They have better blah blah blah blah ……" Yes those are difficult times. Things get worse when you add the female of the species into the fold. They just don't understand what is achieved by being hooked to the television watching some non-de-script sportsman running around. You are chided by your girlfriends (and wives?) when you choose the Junior Hockey World Cup Final over a fulfilling and emotional conversation with her. Counter arguments range from "Its stupid hockey" to "Its JUNIORRRRRR hockey" to anything and everything else. I cannot simply explain to a girl that watching sports gives me a high – a high of a different kind – much cleaner, much sweeter.

So for people like us, it is moments like these we live for. In our own individual life we might not achieve anything. But when something we love greets us Monday Morning in such a modest way, we are overwhelmed and we can say to our detractors "Up yours!!!" and we know that it would be a good week from here on. I know I might never be able to see India do as well as perhaps China or the US by the time I am bed ridden. But that does not deter me from wearing my tricolour on my heart.

So Thank You Abhinav for bringing joy into our lives. Thank You for making this Monday morning so special. India could not have asked for a better commemoration of its 61st anniversary of Independence.

I Smell Gold : This time it's personal

January 11, 2009
Won my first individual event ever in college. Since no one else was blowing my horn, decided to do that myself. So here is my gold winning speech :) Since you might get bored half way through the speech, let me thank the people who need to be thanked right now itself: Apurva, Myth, Zoo, Xar, Kamra, Harsha and even Bishnoi :) Motion: Increasing national security and surveillance is a cosmetic response to any extremist activity in a democratic and tolerant society . :::::::::::::::::::::::::::::: Let me start with a very clichéd “Picture this”. I am a 7 year old boy and I behave like any 7 year old does. I hate milk and I throw a tantrum when I see a glass full of that filthy white thing. As a seven year old I probably don’t know the words tantrum and filthy, but this ignorance does not save me from the wrath of my father. He takes less than 45 seconds to get that milk down my throat. I certainly don’t like it. Thankfully, sometime later my mother explains to me why I need that milk
3 comments
Read more