February 24, 2010
It was 4 pm. I was hungry, having not eaten anything for close to 15 hours. I had spent the last two hours in an examination hall where I had found out the actual name of the course for the first time. Common sense dictated – get food and get rest. Thankfully I had 2 missed calls, when I checked my phone after the exam. They were from Mom. I called back and found out that He was batting on 75. If I did not believe in serendipity earlier, I do now.

We all know what happened next, and papers tomorrow will be full of it. In few or more words they will all call Him a living legend – there was never a doubt over that. They will all salute His genius – one would be blind not to have observed that already. They’ll say men like Him are born once in a century – and surely time will stand witness to that. They’ll all say cricket will never be the same without Him – and I dread to think of the day when He decides to say “that’s all folks”.

Somehow, I always feel that my words will do justice to what I felt, and always I terribly fail. Last time around, 4 months ago, I could manage less than 60 words [here]. If only I could do better this time around. 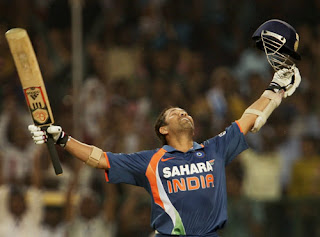 Soon the shots will begin to fade and the numbers will be reduced to a list in the books of stats. What will remain is the memory, an image – like those of a sandstorm, like those of a cut over point – the image of a man looking up at the sky with a tricolor embracing helmet in one hand and a 30-in piece of willow in the other.

Thank God that I parked myself in front of the television at 1615 hrs on Feb 24th 2010 – I could never have forgiven myself otherwise.

And Thank You – for always giving me a reason to say “I’m proud to be an Indian”.